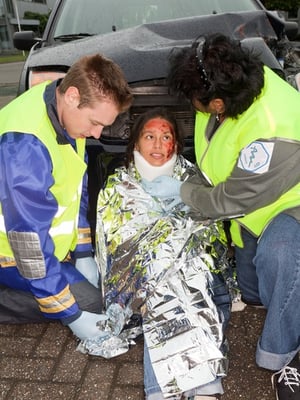 As Ryan Gerecht, MD, CMTE, delineated in this JEMS Article, traumatic shock is defined as inadequate blood supply to end organs due to blood loss, with the physiological consequences of hypovolemia, and hypotension. The resulting poor oxygen supply to vital organs can cause lactic acidosis (defined as an arterial pH of less than 7.35). In turn, coagulation and body temperature become deregulated in an environment of acidosis. In a continuing vicious cycle, hypothermia will then add to the poor response of platelets and clotting factors, causing hemorrhage to become worse.

That is an academic description of the triad of death for trauma victims that may not have immediate relevance to you as first responders. As an EMS professional, you will be much more focused on the signs of shock during emergency care. For example, your EMS team will typically find a victim in the field after a motor vehicle accident, shooting, stabbing, or blunt force trauma, who is exhibiting signs of shock.

This patient will often show all the signs of severe hemorrhage, which may include confusion, cool pale skin, rapid weak pulse, hypotension, and rapid respiration. Accordingly, the patient’s body will attempt to counteract the effects of shock by making compensatory physiologic changes such as increased heart rate and peripheral vasoconstriction. Left untreated, the patient will eventually exhaust physical reserves and become decompensated. At that point, medical intervention will almost always be required to prevent the nearly 40% of trauma deaths that occur among children and young adults in this country attributable to hemorrhagic shock.

Hypothermia and the Triad of Death

The lethal triad, also called the triad of death, in trauma patients consists of acidosis, coagulopathy and hypothermia. As indicated in the JEMS article referenced above Dr. Gerecht, states that, “Left untreated, hypothermia, acidosis and coagulopathy bring about and propagate each other, eventually resulting in a predictable but irreversible progression toward death.”

An important question to ask is how these lethal factors can be most effectively controlled and treated while en route to an emergency center.

With regard to hypothermia, Jeff Solheim MSN RN-BC CEN CFRN FAEN says it best in this presentation. He says, "THE BOTTOM LINE: Hypothermia has detrimental effects on the outcome of severely injured patients. The lower the temperature is allowed to drop, the higher mortality climbs with 100% mortality at temperatures of 32°C."

This EMS1.com article notes that, “Researchers found a 21% mortality rate in patients with a core temperature less than 32° C originating from environmental exposure. However, that same degree of hypothermia following traumatic injury resulted in 100% mortality, independent of the presence of shock, injury severity score, or fluid resuscitation." (Our emphasis added)

Quite correctly, the immediate instincts of emergency medical personnel in the field are to control bleeding and begin IV fluid resuscitation. Often lost in the hectic turmoil of the resuscitative effort, is imperative to restore and preserve body heat for the patient. Eliminating hypothermia, (defined as a body heat less than 35 degrees centigrade) as one of the elements in the lethal triad of traumatic shock, greatly improves the odds of patient survival.

Reversing hypothermia in the trauma patient can be extremely difficult, but preventing it in the first place is relatively simple. It requires recognition that it might occur and the willingness to intervene.

Gerecht listed sixteen steps to be taken to avoid the onset of the lethal triad, seven of which are directly related to contravening hypothermia. They include:

Unfortunately, the implications of hypothermia have not quite received the prominence deserved in discussions of traumatic shock. Possibly this slight is because solutions to hypothermia such as warmed IV fluids and warming blankets are considered “low tech.”

At Graham Medical we are pleased to be able to provide a wide array of single-use EMS blankets to meet the specific needs of EMS professionals and the population of critically injured patients they serve. Download our guide to help you select the right medical blanket for your emergency care situations.