The Latest on EMS PTSD Statistics 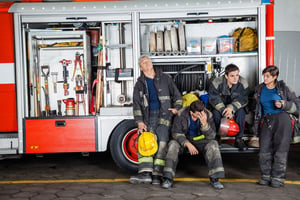 First responders such as EMS personnel, firefighters and law enforcement officers often deal with disturbing scenes when attending to accident victims, fires and violent crime. Although trained to deal with trauma, these tragedies inevitably affect you, especially in the aftermath when you start to process your feelings. Many people experience feelings of anger, helplessness, anxiety and guilt from what they have seen and their perceived inability to adequately help. Additionally, a significant percentage develop Post Traumatic Stress Disorder (PTSD), a condition that's debilitating and difficult to treat. To compound the issue, few EMS services cover treatment costs, time off and workman's compensation for PTSD. Fortunately, this antiquated view is changing and numerous states have, or are enacting, legalization providing workman's compensation for PTSD.

A survey of 2,000 first responders published in April 2018 by the University of Phoenix showed that 84 percent have encountered a traumatic incident, 85 percent experienced mental health issues and 34 percent were formally diagnosed with mental health issues including PTSD, Acute Stress Disorder (ASD) and depression. This data ties in with earlier studies that showed 20 percent of U.S. firefighters and up to 20.3 percent of Canadian EMTs and Paramedics had PTSD. While exact percentages vary, these figures indicate a significant percentage of EMS personnel are grappling with serious mental issues including PTSD.

First responders who develop PTSD often start experiencing symptoms a few weeks after the event. Warning signals include continually reliving the event, nightmares and flashbacks along with feelings of panic and fear. Other symptoms include actively shunning anything that reminds them of the trauma, such as avoiding people, places and activities associated with the trauma. PTSD sufferers have difficulty sleeping, are irritable, easily startled and exhibit destructive behavior, anger and poor concentration. Counseling and treatment are recommended if symptoms persist.

Suicide is a particular risk and consequence of workplace stress. According to a survey conducted in 2015, more than a third of EMS personnel contemplated suicide and over 6.6 percent unsuccessfully attempted suicide. Some reports, such as the 2018 Ruderman First Responders white paper, put these figures even higher.

Belated Recognition of PTSD as a Real Condition

Despite massive evidence that PTSD is a debilitating mental illness, administrations long resisted treating it as a real condition or accepting that sufferers need help and treatment. Possibly it was the massive exposure of incidents such as 911, the publicity surrounding the effects of PTSD in the military, and the surge in mass casualty incidents that helped change attitudes.

Subsequently, several states approved bills to extend workers compensation coverage for PTSD. These include Texas, Vermont, South Carolina, Florida, Washington, Vermont, Idaho and Massachusetts, while others such as Kentucky and West Virginia have bills under consideration.

The public perception of PTSD is that it's incurable and, in a sense, this may be true as there's always a risk symptoms will reappear. However, there are many therapies available to help sufferers deal with the issues associated with PTSD and to come to terms with the trauma that led to PTSD. In many instances these symptoms reduce over time and it's possible to lead normal lives. Early diagnosis and treatment improve outcomes. If you believe you may be suffering from PTSD, or have similar symptoms, its best to seek help even if you have to fund therapy yourself. It takes time, but with the right care, symptoms will diminish and you can start living normally.

At Graham Medical, we care about your health. To learn more about PTSD and other EMS health issues, subscribe to the Graham Medical blog.