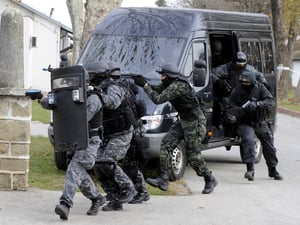 Everyday Emergency Medical Services (EMS) responders provide an important service in treating and transporting patients with minor injuries up to serious, life-threatening conditions. While highly trained and skilled, neither the Emergency Medical Technician (EMT), nor the Paramedic was ever meant to be an expert in mass casualty incidents such as an active shooter event. Just as police units have regular patrol and also SWAT, medical responders also need specialized response teams.

Rescue task forces are primarily created by a quick assembling of responding EMS personnel, paramedics, and fire personnel.  Tactical medics are often specifically attached to a response team like SWAT.

In past active shooter incidents, there have been communication lags and delays in care when responding.  During these delays, precious life-saving minutes tick away for the injured victims.

A rescue task force is, in short, a coordinated response that allows access to victims faster.

Rescue task forces prioritize stabilization, extrication and transport for further care for patients.  This is the opposite of care models that prioritize triage first.

Without a designated rescue task force, the different participating organizations must figure who should take the lead and when it is safe to provide care.  Rescue task forces designate a lead for these situations, and divide responses based on hot, warm, and cold zones of the incident. By responding from a centralized staging zone, EMS can quickly deploy to cleared areas and provide point of wound care.

Usually called in for emergency responses, medics show up in full uniform of the unit to which they are attached, such as a SWAT team. The tactical medic will provide initial medical care as needed to victims, bystanders and perpetrators once the scene is secured, but they may be there, primarily, to provide medical aid to the team members.

The tactical medic will generally transfer patient care to a standard EMS unit if further care and transportation to the hospital are needed.

Another way that you can distinguish these two teams is that rescue task force members wear a standard daily uniform (i.e. fire or police) and are typically dispatched during their normal shift. Their uniforms may be supplemented with tactical vests as needed for safety. Tactical medics wear the uniform of the tactical team they are attached to, often including body armor.  Tactical medics are physically located within the team, or may stay just outside of the hot zone.

Graham Medical is proud to be able to provide EMS products to help first responders do their job more effectively and efficiently.

Graham Medical works to make patient transport faster, easier and safer to promote better outcomes in an emergency. For more information on EMS products, contact us here or visit Grahammedical.com.