How to Protect Your EMS Staff from Fentanyl Exposure 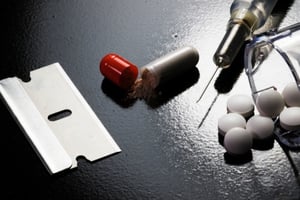 According to the United States’ Drug Enforcement Agency, Fentanyl is a synthetic opioid that is 30-50 times more potent than heroin and up to 100 times more powerful than morphine.

Legal forms of Fentanyl are prescribed for both humans and animals as an anesthetic during surgery or to manage pain after surgery. While these drugs can be lifesavers for patients that need them, such as those experiencing pain from cancer, Fentanyl can be deadly when abused or misused. Illegally manufactured Fentanyl is becoming a tremendous problem because there can be wide variability in the contents and potency of the drug.

Fentanyl is proving to be a danger to more than just those who abuse it, however. The Office of National Drug Control Policy explains that:

“The increased prevalence of Fentanyl and other synthetic opioids in the illicit drug market means that first responders need to understand how to protect themselves from exposure in the field. Law enforcement, fire, rescue, and emergency medical services (EMS) personnel must balance safety with mobility and efficiency when responding to scenes where the presence of Fentanyl is suspected.”

The Center for Disease Control and Prevention (CDC) released an interim report in March of 2018 evaluating the potential occupational exposure to opioid drugs, including Fentanyl and its analogues, for emergency medical workers during emergency medical services (EMS) response.

This evaluation was prompted after a first-responder (known as “Responder A” by the report) developed symptoms of opioid ingestion after assisting in rescue efforts for an overdose victim found in a hotel room filled with drug paraphernalia. Responder A’s symptoms began while still in the emergency room with the patient after transport. The CDC’s report detailed that there were multiple ways this first responder could have ingested or been exposed to Fentanyl despite wearing protective gear and following protocol. Possible scenarios described in the report included:

This scenario highlights the need for emergency personnel to protect themselves from possible exposure to Fentanyl during rescue and transportation.

According to the CDC, The United States experienced a 72% increase in overdose deaths involving synthetic opioids (i.e., Fentanyl) from 2014 to 2015. This exponential increase in opioid-involved emergencies raises concerns about the potential for exposure to emergency workers who may come into contact with opioids during rescue calls.

By using personal protective equipment (PPE) and single-use, disposable products, first-responders can limit their risk of exposure to the dangerous effects of Fentanyl when responding to an opioid overdose. Deploying one of our single-use, fitted sheets and equipment covers is a quick way to prevent cross-contamination on your stretcher. In addition, disposing of other items that may have been contaminated with Fentanyl or one of its analogues further limits risk of contamination.

Graham Medical proudly carries a line of high quality, single-use sheets and blankets which can help in limiting inadvertent exposure to Fentanyl at a rescue scene. Contact us here for a free sample.